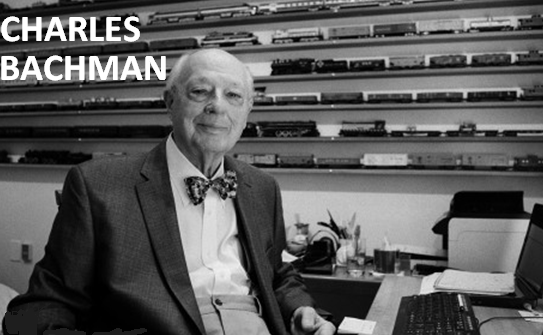 We currently live in a world filled with technological possibilities. Computers and software like SlashDB help us in our daily lives by providing us with information, helping us track information, and storing information – streamlining our lives, allowing us to work smarter, not harder. Flashback Friday is about acknowledging our computer science forebears, remembering their innovation and leadership, and honoring them for their accomplishments.

So let’s flashback and remember the contributions of Charles Bachman – inventor of the first database management system, an achievement that makes him uniquely qualified to be our first Flashback Friday forebear.

Charles Bachman, while not as well-known as Bill Gates or Steve Jobs (whose death has done nothing to diminish his media presence), is still a true leader in the field of computer science. Bachman was developing software before developers were a thing. In fact he is credited with creating the first database management system ever in 1963 while working at General Electric.1

Bachman created the Integrated Data Store (IDS), a database management system that is still influential today. One of the most striking facts about Bachman is that his ideas about databases, now more than 50 years old, are conceptually similar to today’s API and linked data. In fact SlashDB implements his concept, albeit using modern technology (SQL database for a backend and HTTP for transport protocol).

Bachman’s visionary database management system allowed files to be located and modified without the need for the programs to be rewritten when accessing files. IDS accomplished this feat by using a separate data dictionary which allowed users to track data and study relationships between data in different records. 2 For example data on clients and data on manufacturing orders could be easily compared and tracked. This was an innovative movement toward integrating varied types of data that allowed the computer to become a tool for managing information.

Interestingly enough, SlashDB is not the only one making use of Bachman’s ideas today. Database designers even now rely on graphical tools or data structure diagrams to illustrate the complex data structures they use.3 These diagrams are called Bachman diagrams as he was the first to use this method.

So after his amazing contribution to the field of computer science, why hasn’t a film about Bachman been made – a tale of the strikingly innovative computer geek in the tradition of The Social Network and the soon to be released Steve Jobs film? There’s no clear answer to this. We can only hope that Bachman has a sufficiently emotionally complicated backstory to warrant such a film – fingers crossed.

So let’s take a moment to examine the man behind this huge contribution to computer science.

Charles Bachman was an engineer rather than a computer scientist, although his greatest contribution is to computer science rather than engineering. Bachman’s exceptional contribution to database technology hasn’t gone completely unnoticed (despite the absence of a film chronicling his invention). In 1973 Bachman became the 8th recipient of the A.M. Turing Award 4– the highest honor in the field of computer science, and doubly appropriate as an homage to Turing himself (an undoubtedly influential computer scientist – who incidentally has three films, a documentary, a play, and a novel based on him) and for its closeness to the word turning, as recipients’ work represents a specific turning point in the field of computer science.

While a film on Bachman has not yet been made, he is far from being forgotten. In 2014 President Barack Obama awarded Bachman the National Medal of Technology and Innovation.5 Let’s hope that a movie is soon to follow this huge honor.