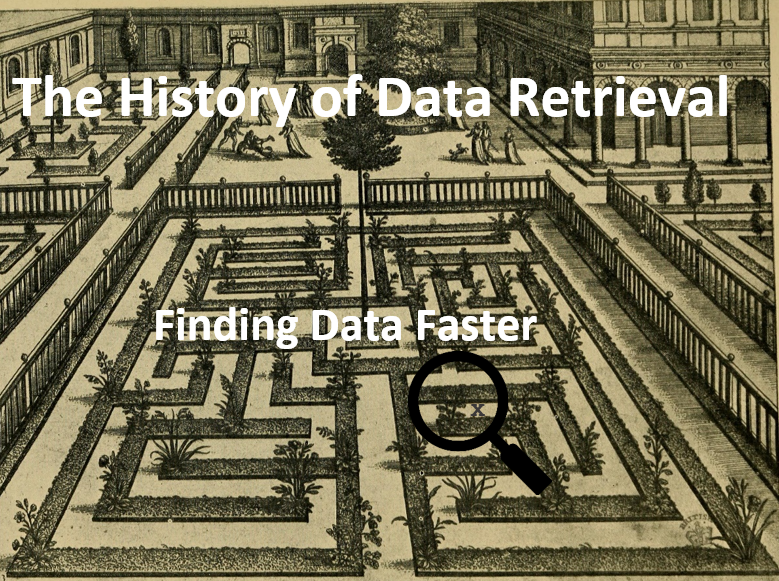 Information or data retrieval is an essential element to business success, as businesses are increasingly relying on data to evaluate user behavior and predict how products will perform within key demographics. Interestingly enough, the ability to access information faster has a long history that winds its way directly to modern APIs, databases, and search engines. Organizing data so that specific information can be retrieved with ease and without wasting copious amounts of time is an endeavor that spans thousands of years and that currently manifests its self in the form of natural language queries.

Without the benefit of search engines and natural language queries, early attempts to make information retrieval faster relied simply on structuring information in a logical and uniform manner. A prime of example of this is the table of contents. The first widely noted use of the table of contents came in 79 A.D. when Pliny the Elder  produced his extensive encyclopedic work, Naturalis Historia. The entire work consists of 37 books, with the first book serving as a massive table of contents listing, book by book, the range of topics Pliny discusses. Notably, Pliny added the names of the Greek and Roman authors whose work provided the foundation for the content in Naturalis Historia, thereby statically linking his work with other published works for readers to reference. In the preface of his work, Pliny the Elder states that this method was first used in Latin literature in the second century B.C. by Quintus Valerius Soranus. Pliny’s and Soranus’ use of a table of contents illustrates that information retrieval and the linking of related data has been an evolutionary process in the making for thousands of years.

Alphabetization and Hierarchies of Information

Alphabetization was first put into practice by Greek scholars working in the library of Alexandria, Egypt in the third century B.C, a century or so after Quintus Valerius Soranus crafted the first table of contents. Structuring information alphabetically helped librarians find and retrieve rapidly expanding Greek literary works more efficiently.
Later on, hierarchies of information were adopted to help find information within a given text faster. In 30 A.D., Valerius Maximus produced a collection of famous deeds and sayings, Factorum ac dictorum memorabilium libri IX. The entire work is broken down into a logical hierarchy so that specific information can be found with minimal effort. Maximus’ work is divided into nine books, with each book subdivided into chapters. Each chapter has its own heading which alludes to the theme of that section. This structure is still maintained by modern novels and text books, as it irrefutably creates a quick and logical method of locating specific information.

Heightened searchability has soared with the ability to search databases with natural language queries. Search engines rely on digital indexes consisting of data pointers to match and locate information specified in queries. Early indexes are the information structure most closely mimicked in modern databases in the form of data pointers. Data pointers have been used since 1964 to help programmers deliberate about data at more advanced levels of abstraction. A data pointer is a value that references or points to another value stored somewhere else within a program memory, acting as a signpost to help users retrieve information more quickly. While this method of indexing is now a common occurrence in relational databases and programs, its original inception in computer science was impressive and innovative. Data pointers’ historical ancestor – the index (found in literature and text books around the world) also has its own resplendent history.

The word “Index” is Latin for “that which points out.” Originally, in ancient Roman times, an index was the title slip attached to papyrus scrolls. These slips of paper, or indexes, contained the title of the work and the author’s name so that each scroll could be easily identified and pulled from storage shelves. These early indexes were very basic because papyrus scrolls contained no page numbers or line counts. However, the role of the index evolved over time.

Indexes in the modern form that we use today weren’t created until the invention of the printing press in 1440. By 1602, indexes were so common place that Shakespeare casually referenced them in his work Troilus and Cressida.

And in such indexes, although small pricks
To their subsequent volumes, there is seen
The baby figure of the giant mass
Of things to come at large.
–Troilus and Cressida (1602)
William Shakespeare

Modern indexes now include the exact location (page numbers) of names and subjects within a book, exactly mirroring the function of data pointers that programmers use to locate data within a program.

SlashDB as Your Aid in Data Retrieval and Index Building

SlashDB allows for indexing at a higher level by using URL data pointers. Our API add-on automatically assigns each data resource a URL so that related data are hyperlinked with a URL from one data point linking to another, such as Customer to Invoices.

As a result of this linking, a search engine crawler can start in the beginning and traverse, crawling out to every connected data resource and actually build an index from the information retrieved. This method is also how Google’s search engine works for websites. When this process is completed users can ask the search engine questions in a natural language, such as “customers from Brazil”, and the search engine responds with URLs to data resource matches found in the index. This heightened search capability allows users to effortlessly pluck a single piece of data from thousands of records.

SlashDB has made it our mission to make data retrieval a highly accessible, searchable, and intuitive process. If you think our innovative methods can help streamline your business, contact us and we’ll work with you to find the best solution for your data retrieval needs.