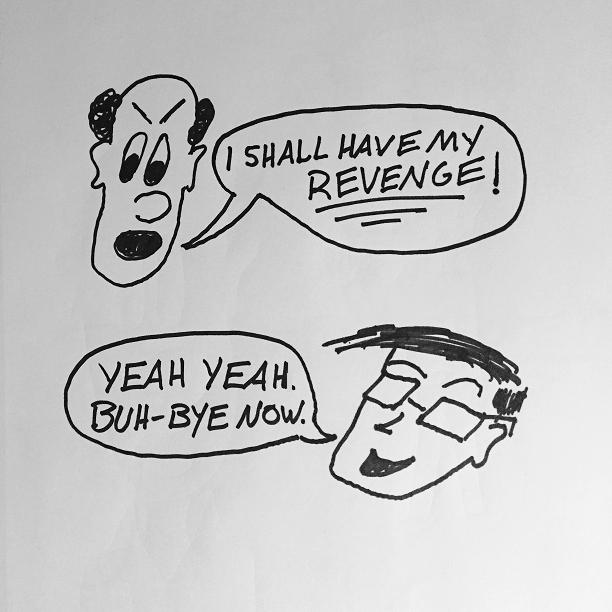 Jim decided that Bret must be evil. Pure, unadulterated, taking-candy-from-a-laughing-baby evil. How else could you explain it? Only a man of malicious intent would put Jim into this position.

He was sure that he had lapped the office at least one million times looking for the elusive database manager. His legs were tired and he was beginning to get looks from his fellow coworkers. He passed a customer service representative. Had he seen Bret? No. He passed the CFO. Had she seen Bret? No. He rounded a corner and passed the IT guy. Had he seen Bret? It’s very important and really can’t wait. No, sorry, but the IT guy would let Bret know that Jim was looking for him, if that was any help.

It wasn’t, but Jim said that would be great, thanks! and resumed his downward spiral around the office. Five minutes ago it had been 4:25 p.m. on an almost-over-Friday and Jim the COO had been looking forward to the weekend. He was going to go camping. Jim loved camping. It was restful and rejuvenating, which was just what he needed before the trade show on Monday. Sure, there was pressure. All of the big e-commerce partners were going to be there to witness the unveiling of a special API Jim’s company had been working on for months now. And sure, Bret the lazy, morally suspect, procrastinating database manager was the one heading that particular project. But, Jim had reminded himself at 4:27 p.m., Bret had been emailing updates (albeit vague ones) on the project for months now. Nothing to worry about, right?

Wrong. At 4:30 p.m., Jim was forwarded the following email from the CEO of the company: 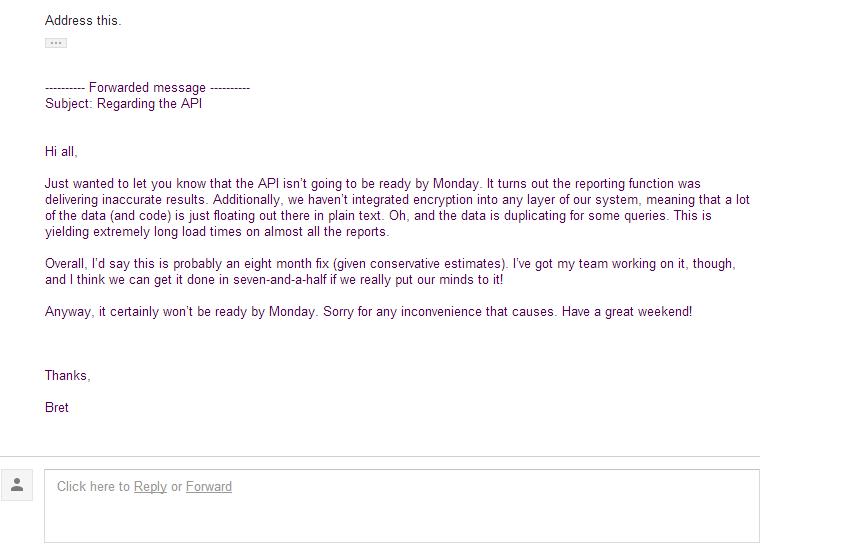 Maybe he was being dramatic.

Immediately after receiving the email from the CEO, Jim walked to Bret’s office. The door was closed and the blinds were down, as usual. He knocked and there was no answer. Jim walked away feeling frustrated, too frustrated to wonder why Bret’s Lair was the only office that had blinds.

At 4:54 p.m., Jim decided that he wasn’t being dramatic and that Bret must be evil. He went back onto the floor and began making laps around the office. At 4:56 p.m., he ran into that IT guy, the one that would let Bret know that Jim was looking for him. Then, upon rounding another corner, Jim ran into Dave the developer. Dave was on Bret’s team. However, Bret was not fond of Dave, nor Dave of Bret (something about Dave insisting that Bret follow best practices and Bret insisting that Dave bring donuts more often). Jim was nigh hopeless at this point, but he figured he’d give it a shot. Had Dave the developer seen Bret?

No, he hadn’t. But he knew, instantly, what Jim’s problem was. He had been expecting Bret’s questionable progress on the project to end up ruining somebody’s day at some point. To Jim’s relief, Dave offered his insight. Maybe, maybe, Jim wouldn’t need to find Bret after all. Maybe he, and Dave the Divine Developer, could handle this themselves. Dave began to explain the goals of the project.

Truthfully, Jim didn’t understand all of the technical details. Dave boiled it down. Basically, the company was supposed to present a RESTful API for their relational databases that was easily navigable and allowed dynamic data manipulation. Because Bret had hamstrung the project, the company had nothing to present. However, Jim now had something to work with.

And, lo, Jim does what every person does when they absolutely need an answer and have no idea how to go about finding it. He searched the internet. His hopes weren’t high but, hey, he figured he’d give it a shot. 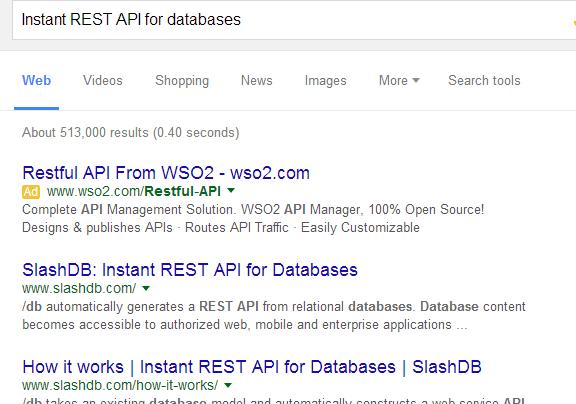 He couldn’t believe his luck. This service, SlashDB, would provide all of the necessary functions of a RESTful API. On top of that, it had the potential to save the company an estimated $30,000 – $40,000 per year. It even had a search bar. The site said it could be set up within hours, which was shorter (by several orders of magnitude) than the time estimate that Bret provided in his email.

Jim was thrilled. He experimented with the demo and, to his delight, found that the service was intuitive and easy to use. Dave also explored the demo and explained that there were several other, more technical features that were particularly useful (the option to visit a destination page using multiple different representations, automatic reflections in the API if the database was changed, the solid security features, etc.). The best part was the setup. The site said that it was, essentially, automatic. Dave confirmed this to be true. Bret wouldn’t even have to participate.

On Monday, when Jim and Dave presented the SlashDB implementation to the CEO (so the CEO could present it to the partners), Bret happened to be in the office. He was furious. He couldn’t believe that Jim would just work around him like that, especially after all of the work that he had put in to the original project. When Dave heard this, he had to cough to stifle his laughter. Bret could tell he was defeated and excused himself from the office with his eyebrows, and his head, lowered. As he walked out, both Bret and Dave could have sworn that they heard phrases like “I can’t believe that traitor,” and “he’ll rue the day he crossed me” muttered under Bret’s breath. The CEO, however, was too delighted with Jim and Dave’s solution to notice. The trade show was in a couple of hours, and everyone (save Bret) was confident that SlashDB would leave the company’s e-commerce partners impressed.

Jim doubted that Bret would let this go. Even with this obstacle surmounted, Bret could provide all sorts of road blocks in the future. He swallowed and tried not to think about it. He and Dave had “addressed it,” at least for today. And, Jim thought, that wasn’t such a bad way to start the week, after all. Especially after a pleasant weekend of rest and relaxation in the woods.